Back to all posts

FOR IMMEDIATE RELEASE: July 19, 2016.  The Hectic's new single 'TIME ON MY HANDS' is available NOW at all your favorite online retail locations.  iTunes, Amazon, GooglePlay & www.thehectic.com

The latest single combines the unique and sometimes chaotic elements of what defines "The Hectic" sound.  With an up-tempo grind that carries dark, brooding melody lines and the signature cryptic TH lyrics.

The official release date for TIME ON MY HANDS is set for July 19, 2016 where it will be available worldwide via your favorite online digital music retailers such as iTunes, Amazon, Google Play, etc. This is the first of approximately 14 new TH tracks that are currently in various stages of production and slated for future release.

"The addition of Matt, Eric and Shawn to this band has taken the songwriting to another level.  I am proud to have shared the stage with all of the previous TH members but I feel the chemistry of the new line-up is the best to date.  I can't wait for every one to experience the new line up for themselves." - Ken Pride

The Hectic's 7 (sometimes 8) piece line-up of Texas flavored  "Industrial Alt Metal” alchemy has been described in the press as “Pantera and Slipknot meets Nine Inch Nails”. The industry took notice of the The Hectic following their self-titled, debut release and the band went on to earned the #1 spot on ReverbNation’s Houston Metal Charts; a position that they held on to for 56 consecutive weeks running. Along with all the other online digital platforms, the self-titled debut album is on Pandora making “The Hectic Radio” available to 35 million listeners worldwide!

Some of the notable accolades include The Hectic's nominations by Houston radio station 94.5 FM Texas Buzz Awards for 2010, 2011 and 2012; “Best Metal Band in Texas” as well as Ken Pride's, nomination for “Best Drummer in Texas” .  The Examiner dubbed The Hectic the “- Get Your $’s Worth-Live Show-”  award. 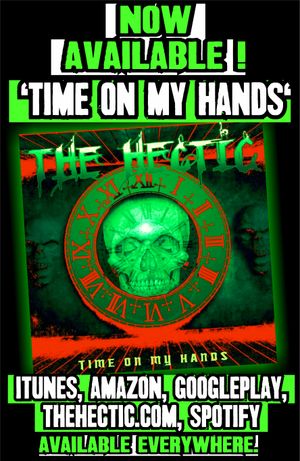